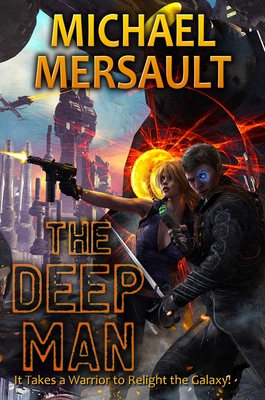 A RELIC OF HUMANITY'S VIOLENT PAST, THIS OLD WEAPON STANDS READY FOR THE EMPEROR TO WIELD

The Galactic Imperium of the Myriad Worlds slumps into centuries of decadent peace enabled by a flood of advanced technology from the mysterious nonhuman “Shapers.” Among the great Families, only the once-mighty clan of Sinclair-Maru remembers the maxims of the warrior Emperor, Yung I, ready to defend the Imperium from any threat.

Stubbornly clinging to the Honor Code, Family prodigy Saef Sinclair-Maru finds himself in command of an outmoded, under-equipped frigate of the Imperial Fleet. With spies and assassins on every side, trusting only in his considerable skill and the bizarre competence of his companion, Inga, Saef must complete his mission, restore the greatness of his Family, and uncover the chilling plot meant to extinguish humanity’s light from the galaxy.

Praise for The Deep Man:
"In his first novel, The Deep Man, Mersault combines themes from Dune, Hornblower, and the Aubrey/Maturin books by the late Patrick O’ Brian, to create a space adventure tale... Recommended to fans of Honor Harrington, Eric Flint, and Patrick O’Brian."-Cirsova Magazine

Although born in the northwestern United States, Michael Mersault spent his formative years in a series of magical locales, including expat communities in the Middle East, a secretive air base in the Arizona desert, and an Alaskan fishing village. These endless hours of travel prompted an enduring love for books that continues unabated.

At times in his adult years, he has dabbled in kickboxing, competitive marksmanship, and international business ventures. He now lives as a semi-recluse back in the northwest, where he fluctuates between the paths of a confirmed technophile and a neo-Luddite.