Tower of Silence (Saga of the Forgotten Warrior #4) (Hardcover) 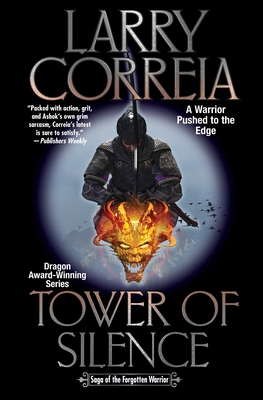 WAR RAGES AS THE GREAT EXTERMINATION SPREADS IN THE LATEST INSTALLMENT OF LARRY CORREIA'S BEST-SELLING SON OF THE BLACK SWORD EPIC FANTASY SERIES.

The assassination of the Chief Judge has pushed the Capitol to the edge. The Great Extermination has spread to all the land. The casteless must be annihilated.

Their only hope is the fallen Protector Ashok Vadal. But Vadal is being held prisoner on the island of Fortress. In order to save those who need him most, he must escape and find his way across the demon-infested sea and return to Thera, the prophet of an illegal and forgotten god. It is she who has sent the Sons of the Black Sword to war against the warrior caste, hoping to buy time until Vadal’s return.

But as the chaos swirls, Grand Inquisitor Omand Vokkan launches a coup to install Lord Protector Devedas as his puppet king. Devedas has no intention of being anyone’s puppet, but it may not matter. For Vokkan has struck a secret bargain with a demon. Vokkan will destroy the casteless for this ancient being; in exchange, he will be granted the power of the ancient gods.

Ashok Vadal, Thera, and the Sons of the Black Sword face foes both human and supernatural, Byzantine political intrigue and bloody hand-to-hand combat, gods and demons alike. But Vadal is a warrior with a warrior’s heart, and woe to those who would stand in his way—man, god, demon, or otherwise!

About Destroyer of Worlds:
“The inevitable fight scenes are just as epic as fans expect. Packed with action, grit, and Ashok’s own grim sarcasm, Correia’s latest is sure to satisfy.”—Publishers Weekly

About Son of the Black Sword:
“This book has everything I like in fantasy: intense action scenes, evil in horrifying array, good struggling against the darkness, and most of all people—gorgeously flawed human beings faced with horrible moral choices that force them to question and change and grow.”—Jim Butcher, creator of the New York Times best-selling Dresden Files

“Fans who like Correia’s fast-moving style will be pleased with the plethora of action scenes, and epic fantasy readers interested in delving into a new universe should be equally satisfied.  A solid choice for admirers of Brent Weeks and Brandon Sanderson’s Mistborn series.”—Library Journal

“Correia is, above all, a storyteller, and he weaves a unique and entertaining tale. Without question, his action sequences pop on the page, his magic system has a nice wrinkle, and he has the foundations laid out for some excellent character growth as the series continues. . . . [A] definite hit.”—Bookreporter

“The lore here is fascinating and well told. I enjoyed learning the history of the world and the legend of Ramrowan. The politics are just complicated enough to feel real without being too difficult to follow. Where the book truly shines, however, is in the characters. All are well drawn and distinctively voiced.”—SFCrowsnest

“Son of the Black Sword: Saga of the Forgotten Warrior tells of what happens after the war with the gods, when demons were cast out and fell to the world to nearly destroy these unstoppable beasts until the gods sent a hero to save them. Centuries have passed since this event and the people have regulated these events to legend. One Ashok has been chosen to be a protector with a powerful weapon in hand, uncovering those who still practice old ways and are potential dangers to the order—but when he discovers all his efforts have been based on a lie, everything's about to change. A powerful epic fantasy evolves into a solid, compelling read.”—Midwest Book Review

About the urban fantasy of Larry Correia:
“[A] no-holds-barred all-out page turner that is part science fiction, part horror, and an absolute blast to read.”—Bookreporter.com