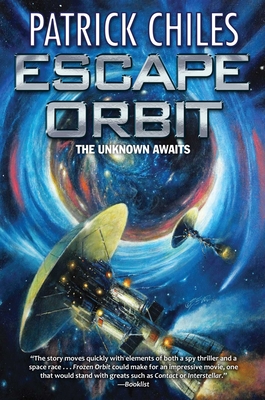 This is book number 2 in the Eccentric Orbits series.

IN A RACE AGAINST TIME, A GATEWAY TO THE UNKNOWN AWAITS

Five years ago, astronaut Jack Templeton took the spacecraft Magellan to the farthest reaches of our solar system, never to be heard from again.

When the Magellan suddenly reappears where an undiscovered planet was suspected to be, it poses more questions than answers. How did Jack survive all this time? Can he make it back to Earth before his life support runs out? And what is the object long thought to be the elusive “Planet Nine?”

In a race against time, Jack’s former crewmate Traci Keene spearheads a desperate effort to outfit a rescue mission. But she has competition. Agencies of both American and foreign governments have their own agendas, and saving rogue astronauts isn’t among them.

And at the edge of all that is known, a gateway to the unknown awaits.

About Frontier:
“Reading through the book, it is very clear just how ripped-from-the-headlines this book really is... Frontier is an enjoyable near-future science fiction thriller, a lightning-fast plot that feels like something that could be seen within the next hundred years.” —Warped Factor

“. . . hard science fiction and an entertaining and gripping plot. . . . Chiles nails the atmosphere of a NASA-run human spaceflight mission in the 21st century, the jargon of the mission controllers and astronauts, and the bureaucratic infighting characterizing today’s NASA. . . . The scenario and background . . . are the scaffolding on which a gripping tale is formed. Readers experience the wonder the astronauts feel on a remarkable voyage, groan as the Earth goes crazy as the expedition progresses, and thrill to a powerful conclusion . . . science fiction at its best.” —The Galveston County Daily News

About Farside by Patrick Chiles:
“The situations are realistic, the characters interesting, the perils harrowing, and the stakes could not be higher.” —John Walker, Ricochet.com

“. . . a fast-paced and exciting story that bounces between the borders of technological thriller and science fiction. . . . an impressive effort.” —The Galveston County Daily News

About Patrick Chiles:
“Chiles puts his military and aviation experience to good use writing science fiction with a hard edge of realism . . . Technology we could build now and situations we’re likely to face when we use it combine to give Chiles’ worlds and characters a verisimilitude that draws you in.”—Rick Partlow, bestselling author of the Drop Troopers series