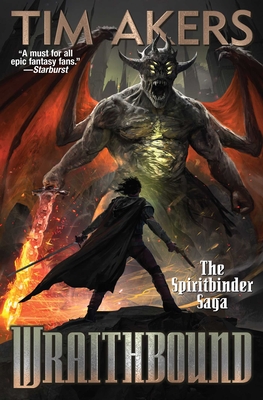 EPIC FANTASY BY A RISING STAR OF FANTASY

Since he was a boy, Rae Kelthannis has dreamed of being a stormbinder like his father, with an air elemental stitched into the fabric of his soul and the winds of heaven at his command. Those dreams died when his father, through no fault of his own, fell into disgrace and was banned by the justicars of the Iron Council. The family fled to the edge of the Ordered World, to live in fear in the shadow of encroaching Chaos.

When Rae defies his father’s orders and attempts to stitch an air elemental to his soul, he instead binds himself to a mysterious wraith. That’s when things get complicated and the world starts to fall apart around him. Literally.

About Knight’s Watch:
“Buckle up and get ready for a fun ride. Tim Akers delivers an epic story about weekend ren faire warriors versus actual monsters. Best fictional use of a Volvo station wagon ever.” —Larry Correia

About Tim Akers:
“A must for all epic fantasy fans.” —Starburst

“Take a bit of fantasy, mix in the horror of the demonic, and put in some top-notch writing and you’ll have Akers’ latest novel.” —Hellnotes

Tim Akers grew up in rural North Carolina, the last in a long line of Scottish bankers, newspaper editors, and tourist-trap barons. He moved to Chicago to pursue his passion for apocalyptic winters, tornadic summers, and traffic. He stayed for the hot dogs.