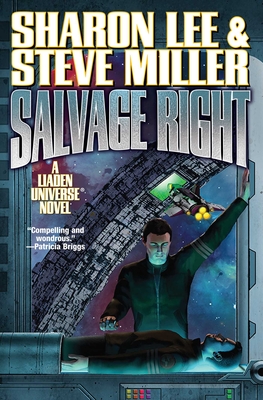 This is book number 25 in the Liaden Universe® series.

A NEW NOVEL IN THE NATIONALLY BEST-SELLING LIADEN UNIVERSE® SERIES

With origins in the Old Universe, the malevolent, acquisitive intelligence of Tinsori Light sought to infect others with itself, and send those agents out into the wide new universe to infect even more.

Just when it seemed that they—merely human—must fail, Tinsori Light, enfeebled by aged systems, succumbed to the stress of a unique spatial event—and died, leaving the station a shell.

Luckily, the light keepers have back-up. A mismatched team of arcane specialists are on-station, working non-step to preserve the Light, build trustworthy systems, and open the refurbished station for business.

In fact, ships are already incoming, and it becomes a matter of urgency to sort friend from foe. In particular, the Lyre Institute wishes to acquire Tinsori Light, and will do anything, spend anyone, to achieve that goal.

About Necessity’s Child:
“Compelling and wondrous, as sharp and graceful as Damascus steel, Necessity's Child is a terrific addition to Lee & Miller's addictive series.” —Patricia Briggs

“These authors consistently deliver stories with a rich, textured setting, intricate plotting, and vivid, interesting characters from fully-realized cultures, both human and alien, and each book gets better.” —Elizabeth Moon

“. . . delightful stories of adventure and romance set in a far future . . . space opera milieu. It’s all a rather heady mix of Gordon R. Dickson, the Forsythe Saga, and Victoria Holt, with Lee and Miller’s own unique touches making it all sparkle and sizzle. Anyone whose taste runs toward SF in the true romantic tradition can’t help but like the Liaden Universe.” —Analog

“. . . the many fans of the Liaden universe will welcome the latest . . . continuing young pilot Theo Waitley’s adventures.” —Booklist on Saltation

“. . . aficionados of intelligent space opera will be thoroughly entertained . . . the authors’ craftsmanship is top-notch.” —Publishers Weekly on Lee and Miller’s popular Liaden Universe® thriller I Dare