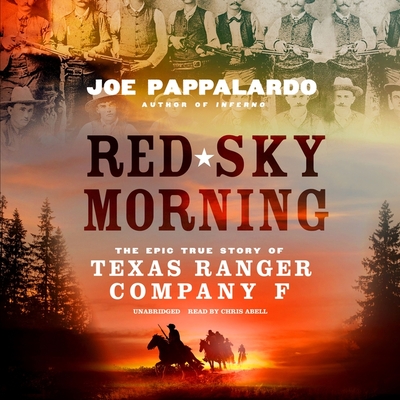 The explosive and bloody true history of Texas Rangers Company F, hard men who risked their lives to bring justice to a lawless frontier

Between 1886 and 1888, Sgt. James Brooks of Texas Ranger Company F was engaged in three fatal gunfights, endured disfiguring bullet wounds, engaged in countless manhunts, was convicted for second-degree murder, and rattled Washington, DC, with a request for a pardon from the US president. His story anchors the tale of Joe Pappalardo's Red Sky Morning, an epic saga of lawmen and criminals set in Texas during the waning years of the Old West.

Alongside Brooks are the Rangers of Company F, who range from a pious teetotaller to a cowboy fleeing retribution for killing a man. They are all led by Captain William Scott, who cut his teeth as a freelance undercover informant but is now facing the end of his Ranger career. Company F hunts criminals across Texas and beyond, killing them as needed, and are confident they can bring anyone to Ranger justice. But Brooks's men may have met their match in the Conner family, East Texas master hunters and jailbreakers who are wanted for their part in a bloody family feud.

The full story of Company F's showdown with the Conner family is finally being told, with long-dead voices being heard for the first time. This truly hidden history paints the grim picture of neighbors and relatives becoming snitches and bounty hunters, and a company of Texas Rangers who waded into the conflict only to find themselves over their heads--and in the fight of their lives.