Calloused Heart: Navigating the Balance between Faith and Violence (Paperback) 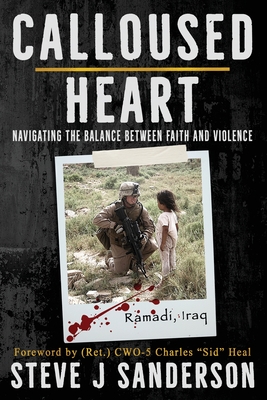 "Gentlemen, look to the Marine on your left and your right-one of you is not coming home."

Marines from Weapons Company, Third Battalion, Seventh Marine Regiment saw combat in Ramadi, Iraq at the height of the OIF conflict in 2005 & 2006 and returned a year later conducting humanitarian operations in a transformed city. The duality of violence and peacekeeping epitomize the image of no better friend, no worse enemy.

Twenty years after the terrorist attacks of 9/11, the next generation of American service members walked in the footprints of their veteran parents. The longest war in American history was waged against an elusive metaphysical enemy: Ideology.

Military service and religious faith are two overlapping battlefields wrought with physical and spiritual enemies. Unfortunately, Christians are being led astray by the influence of conflicting worldviews and misaligned theologies.

Steve J Sanderson approaches the topic of God and violence after surviving Iraq's deadliest city and pacifist Christian ideals after his military service. Calloused Heart takes readers through the violent conflict of OIF to show how three pillars of a healthy faith (Identity, Purpose, Belonging) were forged in fire.

Whether you have a personal experience with violence or not, this book examines Christian participation in hostile conflict to offer hope and understanding for those who choose to take up arms as well as those asking to lay them down.