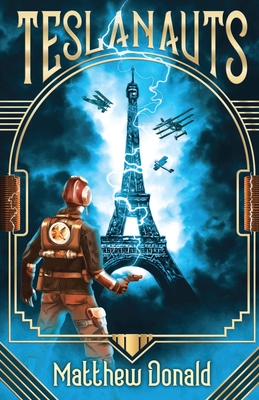 In the spring of 1922, seventeen-year-old Raymond Calvert's life changes forever when searching for answers about his missing father.

Underneath the Hudson River in New York is a secret base for agents called Teslanauts, named in honor of their leader Nikola Tesla, that help the world in the shadows with advanced electrical technology. Learning his father was a Teslanaut agent himself, Raymond joins the organization to find out what happened, roping the Brooklyn teenager into a hidden world of mechs, hovering machines, lightning-armed biplanes, and super-speed suits.

However, the world still reels from the recent Great War, and none so much as the remnants of the Central Powers. In hopes of regaining their former glory, they form a new faction called the Oberschock Federation, armed with similarly advanced technology as the Teslanauts but far more devastating and destructive. And somehow, Raymond's father might have been involved with Oberschock as well.

﻿While Raymond might be desperate for answers, the world hangs in the balance, and only the Teslanauts can keep the Great War from starting once more.