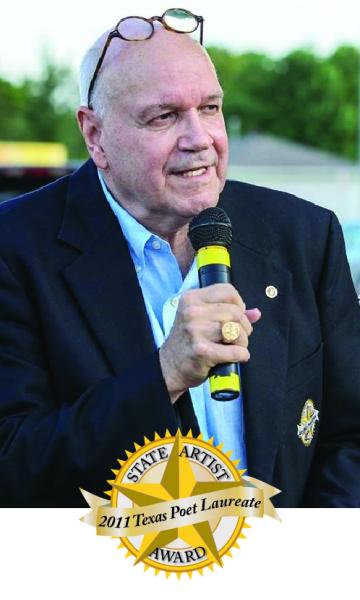 About David M. Parsons: David M. Parsons, 2011 Texas State Poet Laureate, is a recipient of many honors, including an NEH Dante Fellowship to SUNY Geneseo, the French-American Legation Poetry Prize, and the Baskerville Publisher’s Prize from TCU for an outstanding poem published in their literary journal, descant. He holds eight writing awards from Lone Star College System and was inducted into The Texas Institute of Letters in 2009.

Parsons grew up in Austin, graduating from Stephen F. Austin High School. After which, he joined the United States Marine Corps Reserve, where he served as a Squad Leader in a rifle company and later as a Recon-Scout Boat Team Leader. He attended The University of Texas and Texas State University, where he holds a BBA. After several years in business, advertising, teaching Marketing and coaching basketball and baseball at Bellaire High School,

Parsons received his MA from the University of Houston’s Graduate Creative Writing Program.  He teaches Creative Writing and  Racquetball/Handball at Lone Star College-Montgomery. Parsons has four grown children and lives with wife Nancy, an award winning Artist and Graphic Designer in Conroe, Texas.

About Reaching For Longer Water: Award winning poetry critic Ange Mlinko wrote of Parsons and his work, “The Renaissance man was once a courtly ideal; Parsons shows that it is a democratic ideal too—warm-blooded, muscular, as companionable on the page as in the flesh.” Both tangible and cerebral, Parsons’s poetry lifts its readers into a new, transformational reality with a depth of insight that is truly exceptional.

Reaching For Longer Water brings the reader, the most compelling of his poems from his previous four collections, poems hailed by poetry luminaries, Edward Hirsch, Stanley Plumly, Robert Phillips, and Paul Mariani.

THE FRANK GAZE OF WOMEN

not only in the seedy way

we all know: they plant something

in the littoral vacancy

and in an instant there is an ineffable

on which so much more depends