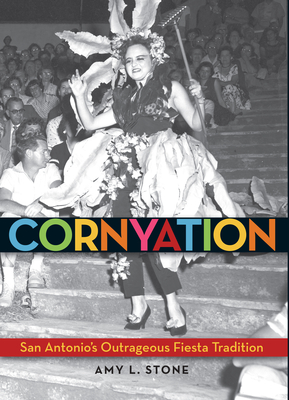 Amy Stone is an associate professor of sociology and anthropology at Trinity University. She is the author of Gay Rights at the Ballot Box and the coeditor, with Jaime Cantrell, of Out of the Closet, into the Archives: Researching Sexual Histories. Stone’s areas of study include lesbian, gay, bisexual, and transgender politics and the incorporation of LGBT individuals into communities and cities, and the law. She lives in San Antonio, Texas.

Half a century of one of Texas’s most iconic celebrations.

Fiesta San Antonio began in 1891 with a parade, Battle of the Flowers, in honor of the memory of the battles of the Alamo and San Jacinto. Similar in many ways to Mardi Gras, the parade has evolved into a ten-day, annual festival in April with more than 100 colorful and cultural events raising money for nonprofit organizations in San Antonio.

Cornyation has played an important role in the transformation of Fiesta. When Fiesta began, many of the events were exclusive and run by San Antonio social elites. One of the most prominent events was the Coronation of the Queen of the Order of the Alamo, a lavish debutante pageant that crowned a queen of the festival. Cornyation was created by members of the San Antonio Little Theater as a satire of the Coronation of the Queen, mocking the elite by creating their own duchesses, empresses, and queens in the show, accompanied by men in drag and local political figures in outrageous costume.

In the 1950s the Cornyation culture helped shift Fiesta into a more inclusive citywide event. While this was not the intention of the show, Cornyation allowed women and men from across the city to participate in Fiesta and created a space for satirical humor directed at a more mainstream audience.

Cornyation traces how the event has changed over time, transforming from an insider event to one of Texas’s iconic and longest-running LGBT events, and one of the first large-scale fundraisers for HIV-AIDS research in the Southwest. Through vintage and contemporary photography and oral histories and stories, the book documents the changes and continuity in the show, highlighting a few important themes in the event's history, including the fact that it has always been a “party with a purpose” that attracts a broad audience, satirizes elites and politics, and creates a place for the public display of campy gay humor.

Fiesta San Antonio began in 1891 began as a parade in honor of the battles of the Alamo and San Jacinto and has evolved into an annual Mardi Gras-like festival attended by four million with more than 100 cultural events raising money for nonprofit organizations in San Antonio, Texas.