Anthony Head, Spirit: The Life and Art of Jesse Trevino 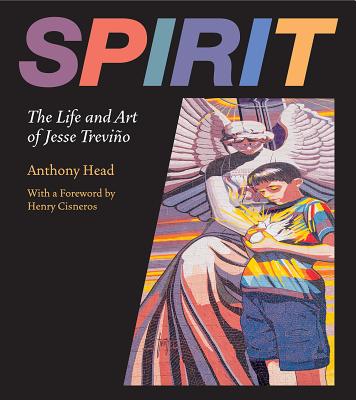 Anthony Head has profiled a far-ranging collection of personalities for national and international publications such as Texas Highways, Men’s Edge, and Reader’s Digest for more than thirty years. He lives in San Marcos, Texas.

Spirit:  The Life and Art of Jesse Trevino:

As he lay bleeding in a Vietnamese rice paddy, his right arm shredded by shrapnel, artist Jesse Treviño realized that he wanted to honor and preserve his family and his cultural heritage through his artwork. After receiving a Purple Heart and undergoing two years of rehabilitative therapy and the amputation of his right forearm—including his painting hand—Treviño enrolled in San Antonio College, determined to learn how to draw and paint with his left hand.

In 1974 he produced the impressive La Historia Chicana, a one hundred-foot-long work embracing six centuries of Mexican American heritage now on display inside the Sueltenfuss Library at Our Lady of the Lake University in San Antonio. Since then, Treviño has completed many more paintings and public artworks, including Spirit of Healing, the nine-story hand-cut tile mosaic that graces Christus Santa Rosa Children’s Hospital in downtown San Antonio. His work has been collected by the Smithsonian American Art Museum, the Lyndon Baines Johnson Library and Museum, and the San Antonio Museum of Art.

Anthony Head’s sensitive and elegant biography now offers readers an intimate view of the artist’s life. Head captures Treviño’s determination, artistic vision, and the deep pride in his Chicano heritage that he transmits to the world through his creations.

Spirit: The Life and Art of Jesse Treviño (Hardcover)