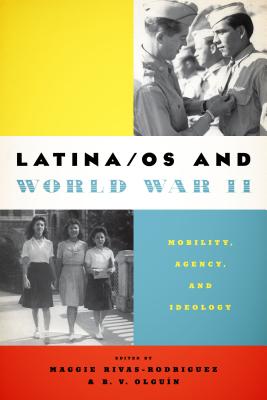 The first book-length study of Latina/o experiences in World War II over a wide spectrum of identities and ancestries--from Cuban American, Spanish American, and Mexican American segments to the under-studied Afro-Latino experience--Latina/os and World War II probes the controversial aspects of Latina/o soldiering and citizenship in the war, the repercussions of which defined the West during the twentieth century. The editors also offer a revised, more accurate tabulation of the number of Latina/os who served in the war.

Spanning imaginative productions, such as vaudeville and the masculinity of the soldado razo theatrical performances; military segregation and the postwar lives of veterans; Tejanas on the homefront; journalism and youth activism; and other underreported aspects of the wartime experience, the essays collected in this volume showcase rarely seen recollections. Whether living in Florida in a transformed community or deployed far from home (including Mexican Americans who were forced to endure the Bataan Death March), the men and women depicted in this collection yield a multidisciplinary, metacritical inquiry. The result is a study that challenges celebratory accounts and deepens the level of scholarly inquiry into the realm of ideological mobility for a unique cultural crossroads. Taking this complex history beyond the realm of war narratives, Latina/os and World War II situates these chapters within the broader themes of identity and social change that continue to reverberate in postcolonial lives.