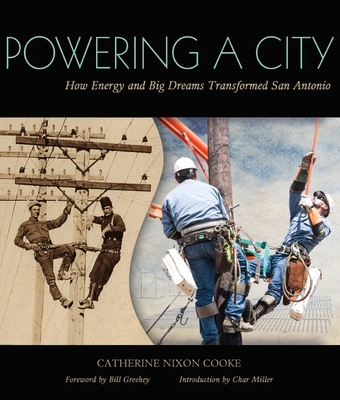 Catherine Nixon Cooke is the former president and CEO of the Mountain Institute, an international nonprofit with four field offices in the Himalayas, and the former executive director of the Mind Science Foundation. The author of Tom Slick, Mystery Hunter and The Thistle and the Rose: Romance, Railroads, Big Oil in Revolutionary Mexico, and Juan O'Gorman: A Confluence of Civilizations. She lives in San Antonio, Texas.

About Powering a City:

At the center of San Antonio’s growth from a small pioneering town to a major western metropolis sits CPS Energy, the largest municipally owned energy utility in the United States and an innovator in harnessing, conserving, and capitalizing on natural energy resources.

The story of modern energy in San Antonio begins in 1860, when the San Antonio Gas Company started manufacturing gas for streetlights in a small plant on San Pedro Creek, using tree resin that arrived by oxcart. The company grew from a dark, dusty frontier town with more saloons than grocery stores to a bustling crossroads to the West and, ultimately, a twentieth-first-century American city. Innovative city leaders purchased the utility from a New York–based holding company in 1942, and CPS Energy as we know it today was born.

In Powering a City, Catherine Nixon Cooke discusses the rise and fall of big holding companies, the impact of the Great Depression and World War II—when 25 percent of the company’s workforce enlisted in the armed forces—on the city’s energy supply, and the emergence of nuclear energy and a nationally acclaimed model for harnessing solar and wind energy.

Known and relatively unknown events are recounted, including Samuel Insull’s move to Europe after his empire crashed in 1929; President Franklin Roosevelt’s Public Utility Holding Company Act of 1935, which made it possible for the city to purchase the San Antonio Public Service Company; the city’s competition with the Guadalupe Blanco River Authority, whose champion was Congressman Lyndon Johnson, in which the city emerged victorious in a deal that today returns billions in financial benefit; and legal wranglings such as one that led to the establishment of Valero Energy Corporation.

Images from CPS Energy’s archive of historic photographs, some dating as far back as the early 1900s; back issues of its in-house magazine; and the Institute of Texas Cultures provide rich material to illustrate the story. As CPS Energy celebrates seventy-five years of city ownership, the region’s industrial, scientific, and technological innovation is due in part to the company’s extraordinary impact on San Antonio.