Catherine Powers, The Spree of '83 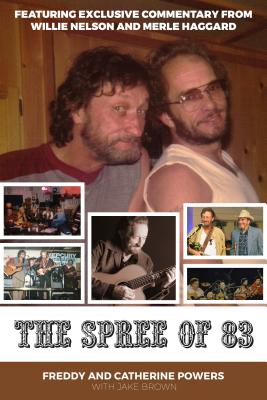 Texas Country Music Hall of Famer Freddy and wife Catherine Powers were married for over 25 years, with Catherine managing Freddy's career as a prolific performer and songwriter, where he is most celebrated for co-writing numerous # 1 hits for Merle Haggard, notably including such fan fav's as "Let's Chase Each Other Around the Room Tonight," "I Always Get Lucky With You," "Natural High," and "A Place to Fall Apart" among countless others. Freddy is the recipient of Lifetime Achievement Awards by the Nashville Songwriter's Association International, the Texas Music Academy, and the Texas Guitar Association, the CMA Triple Play Award, and the BMI # 1 Song Award among other coveted distinctions and honors.

Freddy Powers is affectionately known as the 'Ol Blue Eyes' of Country Music, according to the L.A. Times, and if you were to "ask country superstars Willie Nelson, George Jones or Merle Haggard (they'll)...tell you that he's one of country music's best-kept secrets." The Texas Country Music Hall of Fame inductee has been to the top of the Charts as both a producer (Willie Nelson's Grammy-winning "Over the Rainbow" LP) and songwriter, penning many # 1 hits with sidekick and fellow legend Merle Haggard, who declared "Freddy Powers is one of my favorite people in the world," while Willie Nelson adds personally that "Freddy's strongest suit, I always thought, was his rhythm guitar playing. He was a great rhythm guitar player, and he wrote some great songs with and for Merle. "Sizing up Powers' influence on country music, Country Music Television has noted that throughout his 50-year career, Powers has "demonstrated a dedication to broadening the perimeters of country & western, particularly in creating a fusion of country honky tonk and swing jazz. This interest runs throughout Powers' career," while his hometown Austin Chronicle has affectionately concluded that "Powers' name stands alongside some of country music's most enduring classics." Now, for the first time, in the pages of his memoirs, THE SPREE OF '83, Freddy recounts first-hand the highly-entertaining and emotionally-touching story behind his decades-long roller-coaster ride through the music business, to the top of the charts, and his inspiring struggle in recent years battling Parkinson's disease, all while his legacy endured through generations of fans. Helping Freddy tell his story are exclusive interviews from fellow country music legends Willie Nelson, Merle Haggard, John Rich, Tanya Tucker, The Voice finalist/Powers' protege Mary Sarah, and hosts of other Nashville luminaries.