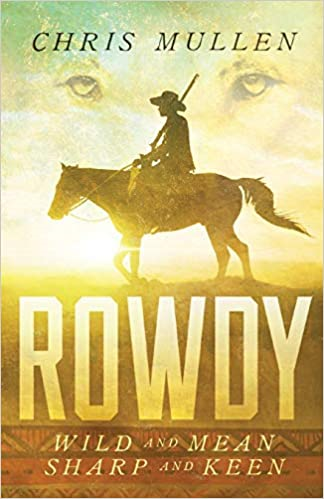 Chris Mullen is an Award-Winning Author and Teacher from Richmond, Texas. He grew up listening to stories of the old west, imagining he was right there with Gunslingers and Comancheros, fighting for survival in an unforgiving time. He graduated from Texas A&M University in 1997 and began his teaching career. With over 20+ years in the classroom, both in Kindergarten and PreK, Chris' imagination and love for storytelling blossomed. Having spent a lifetime devoted to young children, Chris encouraged and guided their development of an active imagination. To enhance this drive for creativity, Chris helped his students bring their ideas to life on the big screen, producing original, student-created movies. Because of his dedication and love for the classroom, Chris was awarded the 2019 Connie Wootton Excellence in Teaching Award presented by the Southwest Association of Episcopal Schools (SAES).

Rowdy: Wild and Mean, Sharp and Keen is the first book of his Rowdy western adventure series and was named WINNER in the 2020 American Fiction Awards AND most recently was named a 2020 Best Book Finalist (American Book Fest- Western category). His love for storytelling continues as he polishes manuscripts and writes for young children as well.

About Rowdy: Wild and Mean, Sharp and Keen:
Thrust to the mercy of the Mississippi river, thirteen-year-old Rowdy floats safely away as he watches the smoke rise from his burning farmhouse. His father, dead. His brother, dead. Both gunned down in front of him by a murderous gang of bandits. Now alone in the world, his perilous journey of survival begins, challenging and shaping him into the young man his father would want him to become. Pulled from the waters, he is given a chance by a lone river Captain and his mate. Working the trade routes between St. Louis and New Orleans, he learns to navigate safe passage but more importantly identify dangers both in and on the water. Rowdy has grown strong working the river but must use his wit as well as his strength to confront a bullying crewman and survive a surprise attack by river pirates. Growing up on the Mississippi River was a start for Rowdy, but a new beginning is just around the next bend. Dodge City, Kansas proves it has its own challenges but gives Rowdy the one thing he has been longing for, companionship. He was warned about Patrick Byrne but was smart enough to procure a sickly horse from Dodge City's most powerful rancher. Rowdy's care for his new horse, Delilah, sees the blossoming of a magnificent animal and loyal friend, yet the rumble of a dark cloud forms over him. Byrne wants the horse back and will go to great lengths to get what he wants.

Facing life and death decisions, Rowdy's only option is to run. Survival is what Rowdy has come to know all too well. His escape across the plains towards Lincoln, New Mexico nearly claims his life. Through a stranger's help, Rowdy recovers but is faced with questions about his rescuer's motives. Deciding to quietly move on, Rowdy finally discovers Lincoln, New Mexico, acquiring a new friend along the way. Rowdy must prove that he is who he says he is, not just to the people of Lincoln, but to himself. Rowdy is finally settling in when hired guns sent by Patrick Byrne find and confront him. Blood, bullets, and tears bring Rowdy's world to a showdown. Fighting for what was right is his code, living life for others becomes his way, and staring danger in the face is what he must do if he can truly be Wild and Mean, Sharp and Keen.