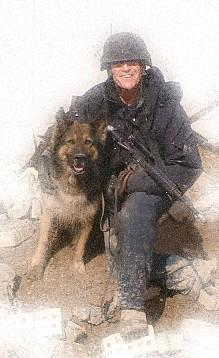 From the Author:
Retired from USAF after serving 21 years as a Police Officer. In those 21 years I received several medals and had been nominated twice and won being the "Top Cop" Air Force wide.

I'm a Certified K9 Trainer.  I've trained hundreds of dogs for police work, including dogs for the FBI and War Dogs for both Iraq and Afghanistan.

I spent 13 months in Iraq as a Handler, Trainer, and Kennel Master.  I had 14 War Dog Teams working under me during that tour.

I had two very high priority assignments during that time. To protect the Prime Minister of Iraq and his staff making sure no explosives got into his compound.  We searched between 800-1,200 vehicles a day for explosives, car bombs.  I was also responsible for making certain no explosives, car bombs got into the area where the largest United States Embassy was being built along the Tigris River in Baghdad, this was accomplished with an additional seven Explosives K9 Teams which brought my K9 Teams I worked with  to that total of 14.

I also spent 12 months in the remote mountains of Afghanistan at a FOB "Forward Operating Base" named "Tarin Kowt." This was an Australian and American Special Forces Base.  Here I had 21 K9 Teams, 17 Explosives Dogs, and four Drug Dog Teams.  All dogs were also trained in Patrol Tactics (Attack Bite Work.)

Four weeks before departing Afghanistan I was injured, those injuries took 8 years out of my life, but, gave me the time to write these two books along with my son Dennis II (Coauthor.)

About the Book:
From the moment K9 Trainer and Handler Dennis Blocker stepped off the cargo plane at Baghdad International Airport it was a constant effort to stay alive. Prepare to follow Dennis as he and his German Shepherds Toris and Laky seek out evil men and the product of their deeds. Feel the scorching sun of the Iraq summer. Hear the snap of sniper rounds as they pass by your head. Experience the concussive wave as explosions rock the capital city. Discover the tiny details that keep people alive in such an environment. Paramount is the extraordinary service of these dogs whose actions saved thousands of lives.