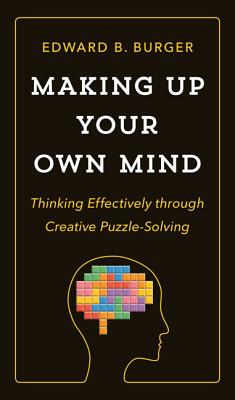 In 1997, Dr. Burger became one of the first individuals to make instructional mathematics videos accessible to a broader audience through mediums such as CD-ROMs and the Internet. Between 1997 and 2013, he created more than 4,000 such videos covering the curriculum from kindergarten through Calculus II that are watched by millions of people from around the globe.

In 2010, Dr. Burger received the Robert Foster Cherry Award for Great Teaching from Baylor University, one of the most prestigious teaching awards in the world. He spent a year at Baylor serving as the Robert Foster Cherry Professor for Great Teaching, after which the university invited him to stay an additional year and serve as vice provost for strategic educational initiatives.

Dr. Burger was among the people the Huffington Post named to its list of “Game Changers” in 2010 – a group of 100 “innovators, mavericks, visionaries, and leaders in 12 categories who are changing the way we look at the world and the way we live in it.” The publication cited Burger as an Education Game Changer and highlighted one of his innovative approaches to teaching: Encouraging and rewarding effective failure as a means toward greater creativity and deeper understanding.

Dr. Burger has received a number of other national awards, including the 2001 Deborah and Franklin Tepper Haimo National Award for Distinguished College or University Teaching of Mathematics and the Chauvenet Prize from the Mathematical Association of America. In January 2013 he was inducted as one of the first Fellows of the American Mathematical Society.

A noted scholar, Dr. Burger has authored or co-authored more than 35 research articles (with 15 undergraduate co-authors) as well as 12 books including The Heart of Mathematics: An invitation to effective thinking, co-authored with Dr. Michael Starbird from The University of Texas at Austin, which is now in its fourth edition. His most recent book, The 5 Elements of Effective Thinking, also co-authored with Starbird, has been translated into more than 15 foreign languages and has led to speaking invitations from organizations such as Microsoft, the World Bank, the International Monetary Fund, and the U.S. Department of the Interior.

Dr. Burger has delivered more than 400 lectures worldwide and has appeared on more than 40 radio and TV programs, including a Mathletes episode of NBC’s “Science of the Winter Olympics” series that was shown throughout the 2010 Winter Olympic Games, which earned him a Telly Award. Burger also served for three years as mathematics advisor for a series of educational programs that were made to accompany the popular CBS television series, “NUMB3RS.”

About Making Up Your Own Mind: Thinking Effectively through Creative Puzzle-Solving:

How you can become better at solving real-world problems by learning creative puzzle-solving skills.

We solve countless problems—big and small—every day. With so much practice, why do we often have trouble making simple decisions—much less arriving at optimal solutions to important questions? Are we doomed to this muddle—or is there a practical way to learn to think more effectively and creatively? In this enlightening, entertaining, and inspiring book, Edward Burger shows how we can become far better at solving real-world problems by learning creative puzzle-solving skills using simple, effective thinking techniques.

Making Up Your Own Mind teaches these techniques—including how to ask good questions, fail and try again, and change your mind—and then helps you practice them with fun verbal and visual puzzles. The goal is not to quickly solve each challenge but to come up with as many different ways of thinking about it as possible. As you see the puzzles in ever-greater depth, your mind will change, helping you become a more imaginative and creative thinker in daily life. And learning how to be a better thinker pays off in incalculable ways for anyone—including students, businesspeople, professionals, athletes, artists, leaders, and lifelong learners.

A book about changing your mind and creating an even better version of yourself through mental play, Making Up Your Own Mind will delight and reward anyone who wants to learn how to find better solutions to life’s innumerable puzzles.

And the puzzles extend to the thought-provoking format of the book itself because one of the later short chapters is printed upside down while another is printed in mirror image, further challenging the reader to see the world through different perspectives and make new meaning.

Making Up Your Own Mind: Thinking Effectively Through Creative Puzzle-Solving (Hardcover)