Edward Polansky, Oscar the Osprey: The Bird Who Was Afraid of Heights 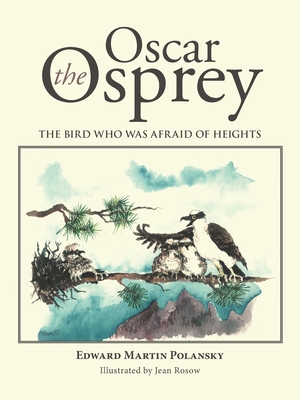 Edward Martin Polansky Author Edward Martin Polansky is a Certified Public Accountant in San Antonio and has been in public practice for over forty years with Ernst & Young, with his own firm, and with a regional accounting firm, Weaver and Tidwell LLP. He currently is Of Counsel with Weaver and consults with individuals and businesses on tax and financial planning matters. During his career he has written for various technical publications and lectured on numerous professional topics. Oscar the Osprey is his initial effort as an author of a children's book, although he has had an avid interest in children's literature ever since he worked in the children's department of the Corpus Christi Texas Public Library while in high school and college.

Illustrator Jean Rosow interprets objects and scenes around her-from the serene elegance of a tropical courtyard to the subtle details of a passing sailboat. The artist studied at the Art Institute of Chicago and graduated from Northern Illinois University in 1966. Since then she has been making her pen-and-ink sketches and watercolor paintings across the USA, Europe, the Middle East, and the former USSR. Her award-winning works are displayed in galleries, homes, and places of business in many states. Her clients include private individuals, corporations, advertising agencies, municipalities, and non-profit organizations. She lives in San Antonio, Texas, with her husband.

About Oscar the Osprey: The Bird Who Was Afraid of Heights:

The book is set in the Tetons Mountains and begins with the newly hatched Oscar and his difficulty with relating to his parents, peers, and surroundings because of his unusual handicap. He not only suffers humiliation as a result of it but he faces serious limitations to his normal development and ultimately his ability to survive in the wild. It is about how he compensates for his handicap, the animals and dangers he encounters, and the fact that he is faced with how to survive the unfamiliar bitter cold and threatening winter world.

Oscar the Osprey: The Bird Who Was Afraid of Heights (Paperback)