Gary Scharrer, Connecting Texas: True Tales of the People Who Built Our Highways and Bridges 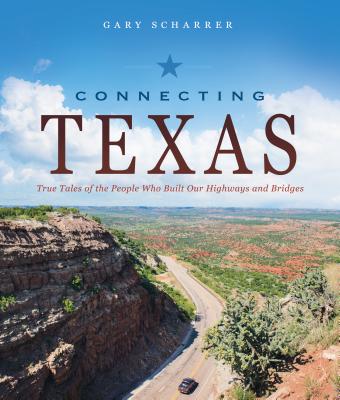 Gary Scharrer first experienced the full benefits of roads at a younger age than most. Both of his parents grew up on dairy farms, and Scharrer was eleven years old when he first started driving farm machinery on rural Michigan roads. He enjoyed running tractors cutting and baling alfalfa hay and cultivating navy beans and corn.

He paid his way through college working on Great Lakes freighters that hauled taconite iron ore pellets from the northern shores of Lake Superior to the steel mills in Detroit, Cleveland, and Buffalo. He lived and worked as a deckhand on the freighters--some as long as 1,000 feet--seven days a week. Other cargoes included coal, gypsum, sand, and limestone. Back then, he didn't know that limestone could be used in making road base.

For most of his career, Scharrer worked as a newspaper reporter covering Texas politics and public policy issues, and for nearly thirty years, he reported from the Texas State Capitol Bureau for the San Antonio Express-News, the Houston Chronicle, and the El Paso Times. During that time, he won five Texas Headliner Club awards.

Scharrer got his start in journalism as a sports writer and sports editor at Michigan State University's student newspaper and went on to become sports editor of The Grand Junction Daily Sentinel (Grand Junction, Colorado) and editor of the Frankenmuth News (Frankenmuth, Michigan). In 1987, he was a reporter at USA Today in Washington, D.C.

After forty-three years as a journalist, he joined the staff of Texas Senate Finance Chairman Tommy Williams (R-The Woodlands), before landing at the Associated General Contractors of Texas. Scharrer's work on Connecting Texas reflects his longstanding interest in highway transportation.

Scharrer presently divides his time between Frankenmuth, Michigan, where he lives with his native Texan wife, Gay, who is a retired schoolteacher, and Austin, Texas, where he spends time with his son, Ryan, and his daughter-in-law, Anne Marie.

The evolution of the national system of roads in the United States is undeniably linked to our unique history and our past and future successes. Today's roads are a long way from the Model T days, when bold early contractors used mules and Fresnos to build roads and bridges that literally helped people up out of the mud and across uncrossable rivers. Those primitive roads, developed back at the beginning of the twentieth century, link us to each other today. But that story didn't happen over night.

The legacy of the colorful contractors whose careers intersected with the influential Association of General Contractors provides the basis for Connecting Texas, which is rich in personal interviews and present-day and historic photographs. Gary Scharrer clearly captures the effect that good roads have had on the Texas (and national) economy. But this longtime reporter also weaves an informed and entertaining narrative that will put readers face-to-face with the inspirational and larger-than-life stories of the giants and everyday people who gave Texas a road system that is the envy of the country.

Millions of us get into our vehicles every day to go to work, or school, or any number of other places in our daily lives. But the majority of us don't think about the roads underneath us. We jump in our cars or trucks, and off we go. But what about the individuals and the hard work and grit that it took--and continues to take--to build and maintain these essential arteries? Most of us generally take it for granted that good roads and bridges are simply a guaranteed fact of everyday life.

Connecting Texas: True Tales of the People Who Built Our Highways and Bridges (Hardcover)