Harriet Romo and William Dupont, Bridging Cultures: Reflections on the Heritage Identity of the Texas-Mexico Borderlands 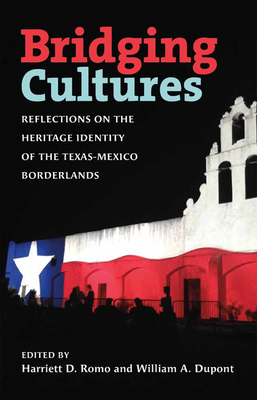 About Bridging Cultures: Reflections on the Heritage Identity of the Texas-Mexico Borderlands:
Borderlands: they stretch across national boundaries, and they create a unique space that extends beyond the international boundary. They extend north and south of what we think of as the actual “border,” encompassing even the urban areas of San Antonio, Texas, and Monterrey, Nueva León, Mexico, affirming shared identities and a sense of belonging far away from the geographical boundary.

In Bridging Cultures: Reflections on the Heritage Identity of the Texas-Mexico Borderlands, editors Harriett Romo and William Dupont focus specifically on the lower reaches of the Rio Grande/Río Bravo as it exits the mountains and meanders across a coastal plain. Bringing together perspectives of architects, historians, anthropologists, sociologists, educators, political scientists, geographers, and creative writers who span and encompass the border, its four sections explore the historical and cultural background of the region; the built environment of the transnational border region and how border towns came to look as they do; shared systems of ideas, beliefs, values, knowledge, norms of behavior, and customs—the way of life we think of as Borderlands culture; and how border security, trade and militarization, and media depictions impact the inhabitants of the Borderlands.

Romo and Dupont  present the complexity of the Texas-Mexico Borderlands culture and historical heritage, exploring the tangible and intangible aspects of border culture, the meaning and legacy of the Borderlands, its influence on relationships and connections, and how to manage change in a region evolving dramatically over the past five centuries and into the future.