Jeff Lanier, For the Minds and Wills of Men 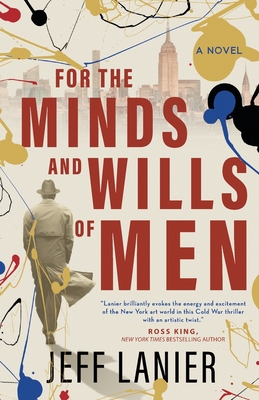 Jeff Lanier is a born-and-raised Texan. He earned bachelor's degrees in History and Art History at the University of Texas with a focus on the History of American Culture through Art and Literature. He has a masters from Rice University and is a member of the American Society of Aesthetics. For the Minds and Wills of Men is his first book.

Author and Art Historian Ross King says, "Lanier brilliantly evokes the energy and excitement of the New York art worlds in this Cold War thriller with an artistic twist. Along the way, he gives us insights into Abstract Expressionism and the power of art to communicate values and ideas."

Kirkus Review has written that Jeff "Intelligently limns not only the American obsession with Communist infiltration in the wake of World War II, but also the emergence of abstract expressionism in the U.S. This is an exceedingly intelligent and unpredictable story. A mesmerizing spy thriller, thoughtful and dramatic."

Manhattan, 1953. Fear of communist subversion and espionage are tearing America apart. Abstract expressionism is on the verge of exploding, making New York the cultural epicenter of the world.

While recovering a stolen Jackson Pollock for a wealthy client, art insurer Will Oxley falls for the client’s daughter, Liz, who leads him deep into the rebellious and seductive world of the abstract expressionist painters, their Village bar haunts and East Hampton binges. But when Will learns the painting⁠—and Liz⁠—may be hiding communist secrets better left hidden, he finds himself caught between exposing the girl he loves or risking his life by trusting her instead. Will is chased through the streets of Manhattan by government agents, blacklisted, entangled with the mafia, and pursued deep into the bowels of the lower stacks of the New York library. Realizing nothing is as it seems, Will is caught between communist espionage, secret government programs, and the grip of cold war fear, suspicion, and betrayal where trust is all he has left ….

With post-World War II New York, 1950s avant-garde art world, and the House Un-American Activities Committee hearings as background, the novel tells the story of abstract expressionism and mid-century American politics– through the thrilling search for a stolen Jackson Pollock.

For the Minds and Wills of Men (Paperback)

A gripping, historical art mystery set in 1950s Cold War Manhattan full of intrigue and conspiracy, For the Minds and Wills of Men is a story of art, love, and espionage, as well layered and complex as the abstract expressionist paintings that take center stage.