Jeffrey Hunt, Meade and Lee After Gettysburg: The Forgotten Final Stage of the Gettysburg Campaign, from Falling Waters to Culpeper Court House, July 14-31, 1863 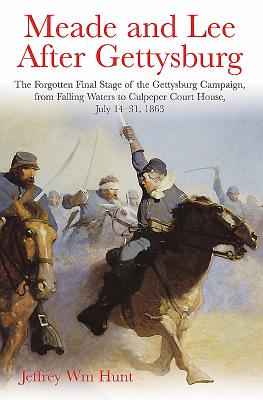 Jeffrey William Hunt is Director of the Texas Military Forces Museum, the official museum of the Texas National Guard, located at Camp Mabry in Austin, Texas, and an Adjunct Professor of History at Austin Community College, where he has taught since 1988. Prior to taking the post at the Texas Military Forces Museum, he was the Curator of Collections and Director of the Living History Program at the Admiral Nimitz National Museum of the Pacific War in Fredericksburg, Texas for 11 years. He holds a Bachelors Degree in Government and a Masters Degree in History, both from the University of Texas at Austin. In 2013, Mr. Hunt was appointed an honorary Admiral in the Texas Navy by Governor Rick Perry, in recognition of his efforts to tell the story of the Texas naval forces at the Texas Military Forces Museum. At both the Texas Military Forces Museum and the Admiral Nimitz Museum he has organized and conducted hundreds of living history programs for the general public. He is a veteran reenactor of the War Between the States as well as the War of 1812, the Texas Revolution, World War I, World War II, and the Vietnam War. He is a frequent speaker for a wide variety of organizations as well as documentaries and news programs. Mr. Hunt's writing credits include his book, The Last Battle of the Civil War: Palmetto Ranch, and contributions to Essential Civil War Curriculum, the Revised Handbook of Texas and the Gale Library of Daily Life: American Civil War.

About Meade and Lee After Gettysburg: The Forgotten Final Stage of the Gettysburg Campaign, from Falling Waters to Culpeper Court House, July 14-31, 1863:

Jeffrey Hunt's Meade and Lee After Gettysburg: The Forgotten Final Stage of the Gettysburg Campaign, from Falling Waters to Culpeper Court House, July 14-31, 1863 exposes for Civil War readers what has been hiding in plain sight for 150 years: The Gettysburg Campaign did not end at the banks of the Potomac on July 14, but deep in central Virginia two weeks later along the line of the Rappahannock. Contrary to popular belief, once Robert E. Lee's Army of Northern Virginia slipped across the swollen Potomac back to Virginia the Lincoln administration pressed George Meade to cross quickly in pursuit--and he did. Rather than follow in Lee's wake, however, Meade moved south on the east side of the Blue Ridge Mountains in a cat-and-mouse game to outthink his enemy and capture the strategic gaps penetrating the high wooded terrain. Doing so would trap Lee in the northern reaches of the Shenandoah Valley and potentially bring about the decisive victory that had eluded Union arms north of the Potomac. The two weeks that followed was a grand chess match with everything at stake--high drama filled with hard marching, cavalry charges, heavy skirmishing, and set-piece fighting that threatened to escalate into a major engagement with the potential to end the war in the Eastern Theater. Throughout, one thing remains clear: Union soldiers from private to general continued to fear the lethality of Lee's army. Meade and Lee After Gettysburg, the first of three volumes on the campaigns waged between the two adversaries from July 14 through the end of 1863, relies on the Official Records, regimental histories, letters, newspapers, and other sources to provide a day-by-day account of this fascinating high-stakes affair. The vivid prose, coupled with original maps and outstanding photographs, offers a significant contribution to Civil War literature. Thanks to Hunt these important two weeks--until now overshadowed by the battle of Gettysburg and almost completely ignored by writers of Civil War history--have finally gotten the attention they have long deserved.

Meade and Lee After Gettysburg: The Forgotten Final Stage of the Gettysburg Campaign, from Falling Waters to Culpeper Court House, July 14-31, 1863 (Hardcover)