Jennifer Zimmerle, Margaret Wortham and Allison Freeman sit and sign at Twig: Big Bend is Not in London 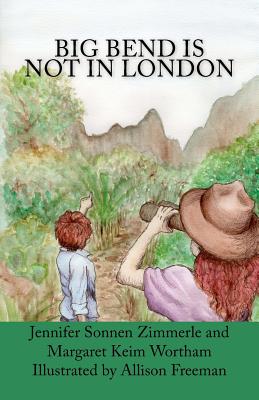 Ten-year-old Tara and her seven-year-old brother Adam were disappointed to discover that they were going to Big Bend National Park in West Texas, instead of the Big Ben Clock Tower in London, England for their Spring Break trip. They soon discovered that Big Bend was a great place, and they had fun earning their Junior Ranger badge. Upon earning their badge, Tara and Adam were anxious for a mission where they could “save the park!”
A litterbug was leaving trash on one of the park’s most popular trails, The Window Trail, found in the Chisos Basin area where they were camping. Tara and Adam set out with their parents to discover the culprit. By observing their surroundings, interviewing suspects, and utilizing Tara’s dreams and secret déjà vu gift, the children found the perpetrators. Along the trail they encountered various plants and animals of the Big Bend, some friendly and others not so friendly. The children were rewarded and honored by the Park Rangers and
other visitors to the park. Though just a week had passed, the children felt they had gained years of wisdom and experience. They would not have traded their time in the Big Bend National Park for a trip to London.

Jennifer Sonnen Zimmerle is a retired high school math teacher, mother of two, grandmother of four, and is a native of San Antonio, Texas. She has traveled throughout the U.S. seeing the sites and visiting National Parks since she was a child. Her first visit to Big Bend National Park was in 1973. Big Bend  National Park has since become a regular camping adventure for Jennifer. She aspires to write a series of books on the National Parks to which she has traveled with her co-author and her children.

Margaret Keim Wortham is a retired primary school teacher of 21 years, living in La Vernia, Texas. She has two children, and two grandpuppies. She loves all of the arts, gardening, cooking, playing games, and traveling the world over. She especially loves the great outdoors, bicycling, swimming, and of course camping in the National Parks. The vast open spaces and beauty of Big Bend National Park makes it among her favorite of the Parks. She is looking forward to more National Park camping to research the next Tara and Adam Junior Ranger adventure.

Allison Freeman is an artist and illustrator from La Vernia Texas. She recently graduated with a Bachelor’s of Fine Arts in 3D animation from the Academy of Art University. Her passion is telling stories visually through her work. She is currently creating new artwork, graphics, and illustrations. She hopes you enjoy this book as much as she enjoyed illustrating it.

Big Bend Is Not In London (Paperback)