Fight for the Forgotten 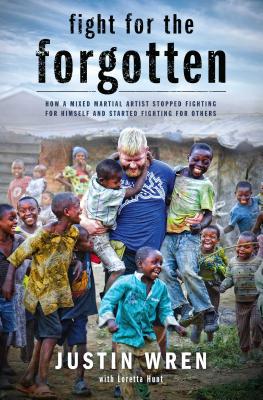 About Justin Wren: Justin Wren is a Christian motivational speaker, missionary, social activist, and mixed martial artist. Since 2010 Justin has shared his testimony of love and redemption in prisons, schools, churches, drug rehabilitation centers, college universities, and youth groups worldwide. In 2009, Justin was a quarter-finalist on Spike TV’s The Ultimate Fighter during its tenth season. He debuted in the UFC that year and his professional record stands at 13-2. Justin launched “Fight for the Forgotten”, in conjunction with Shalom University, to raise funds for a program to liberate 1,000 persecuted Mbuti Pygmy slaves and relocate them to self-sustainable land of their own in the eastern Congo region.

About Fight for the Forgotten: At a stocky 6’4 with a long blonde beard, former “Ultimate Fighter” contestant and mixed-martial artist, Justin “The Viking” Wren, is the last person you think you would find in a remote African village, living among the Pygmies. But, that’s exactly what he did for an entire year, after visiting several times and witnessing the persecution they faced from neighboring tribes.

In his new book, FIGHT FOR THE FORGOTTEN, Justin, along with veteran sports journalist Loretta Hunt, details his personal account of faith, redemption, empowerment, and overwhelming love as he sets out on an international mission to fight for those who can't fight for themselves.