Len Bourland, Normal's Just a Cycle on the Washing Machine

Normal's Just a Cycle on the Washing Machine 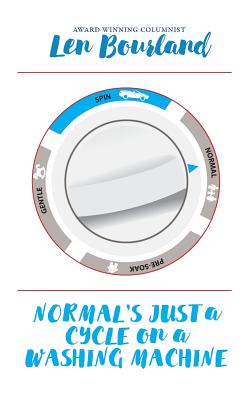 About Len Bourland: Len Persons Bourland is an award winning columnist in Dallas with her columns in the Park Cities People for over two decades, a freelance writer with credits in local publications including D magazine and the former Dallas Times Herald, and a guest commentator on local NPR’s KERA 90.1 radio. Her writings about her children’s antics and wry insights upon moving to the land of flash and cash in the Reagan Era in the 80’s quickly expanded into frank and amusing episodes of surviving a public divorce, single parenting adolescents, dating at mid-life, building a career, living and loving through the New Millennium to whatever this era is now.

About Normal's Just a Cycle on the Washing Machine: The witty memoir of local Dallas writer/mother Len Bourland as glimpsed through excerpts of her award winning columns from the Reagan Era to whatever this era is now. Sort through your laundry with hers as she begins in the Pre-soak halcyon days of a carpooling doctor’s wife and her Normal years of raising two sons and a daughter to her Spin Cycle of divorce and depression.

In her Second Cycle her load increases as she emerges as a working mother of adolescents who begins dating just as they do in the consumer 90s and New Milennium. With poignancy and humor she deftly brings us full cycle in her concluding Gentle Wash.

Her wry insights provide more than just a fast paced rollicking read as her recalibration of life reflects changes of society as a whole as we wash, spin, repeat. Len is the self-described child of the international corporate move and has many readers as she often broadcast her columns on KERA, local Dallas NPR.

Normal's Just a Cycle on a Washing Machine: A Memoir (Paperback)