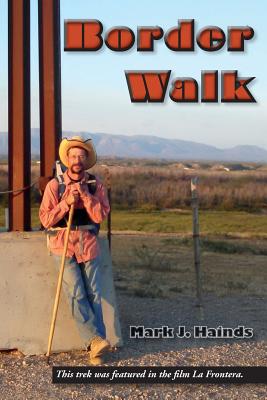 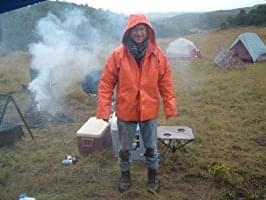 Mark grew up hunting, fishing, and trapping as the sixth generation on the Hainds family farm in north-central Missouri. After receiving degrees in forestry from the University of Missouri and Auburn, he relocated to Lower Alabama (LA) working dual positions as the first employee of The Longleaf Alliance (LLA) and as a Research Associate with Auburn University (AU) School of Forestry and Wildlife Sciences. In 2007 Mark pursued a vital goal of killing at least one feral pig in ten different states, providing the material for his first book, Year of the Pig, published by the University of Alabama Press in 2011. Growing restless, Mark resigned his two-decade long positions with the LLA & AU, took leave of his family, and on October 27th, 2014, he started walking south and east from International Mile Marker #1 in El Paso, Texas, hiking the road or trail closest to the Rio Grande. 1,010 miles and seven weeks later, he waded into the Gulf of Mexico at Boca Chica Beach in Brownsville, Texas on December 21st, 2014. On the two-year anniversary of completing the Texas walk, he returned to El Paso, this time walking west across New Mexico, Arizona, and California. On Nov. 24, 2017 Mark became the first person in history to have walked the length of the US-Mexico Border. Mark’s second book, Border Walk (published March, 2018), details his trek along the Texas/Mexico border, encountering an incredible array of talent, or lack thereof, with: undocumented immigrants, drug runners, the Tex-Mex Compadres, herpetofauna, law enforcement, good Samaritans, and a Hiking Viking. Mark’s third book will cover the walk west, through NM, AZ, and CA, along with the potential downfall of western civilization. His family owns a small business named Sweetbill's Enterprises, producing: cultivated and foraged mushrooms, lumber, grilling/smoking woods, jams & jellies, and fresh fruits and vegetables, most of which they sell at the Palafox Market in Pensacola, Florida.

Border Walk takes readers on a remarkable journey along the front lines of a misunderstood and misrepresented frontier. Check your border hype at the door and discover, as Mark Hainds does, the rich tapestry of life along our border with Mexico.