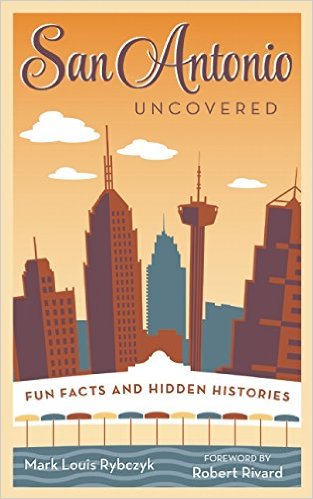 About Mark Rybcyzk: An award-winning disc jockey, Mark Louis Rybczyk started his career at KXZL, WOAI, and KJ-97 in San Antonio before moving to 96.3 KSCS in Dallas, where he had the longest-running morning show in the Dallas–Fort Worth area. Rybczyk also penned The Travis Club, a historical thriller based on San Antonio lore.

About San Antonio Uncovered: Quirky and amazing facts about the Alamo City

San Antonio is one of the fastest growing and most dynamic cities in America. The Alamo City's charm, colorful surroundings, and diverse culture combine to make it one of the most interesting places in Texas and the nation. In San Antonio Uncovered, Mark Rybczyk examines some of the city's internationally known legends and lore (including ghost stories) and takes a nostalgic look at landmarks that have disappeared. Introducing the city’s characters and unusual features, Rybczyk debunks local myths and corrects common misconceptions to create a unique portrait of a city on the rise.

Rybczyk embraces San Antonio's peculiarities by chronicling the cross-country journey of the World’s Largest Boots to their home in front of North Star Mall, the origins of the Frito corn chip and chewing gum, the annual Cornyation of King Anchovy, and Dwight Eisenhower's stint as the football coach at St Mary’s University.

This updated edition of San Antonio Uncovered highlights San Antonio as a modern, thriving city with the feel of a small town that sees beauty in the old. It shows why San Antonio's diverse inhabitants will champion something as seemingly insignificant as an old Humble Oil Station, work to blend the old and the new at the Tobin Center, and fight to save what’s left of the Hot Wells Hotel.

Local lore has it that every Texan has two hometowns—their own and San Antonio. San Antonio Uncovered explores the reasons there is so much to love and learn about everyone's adopted city.