Michael Kihntopf, A Remote Army Post in the Desert, Petrograd to Shanghai, November 1919 to January 1922 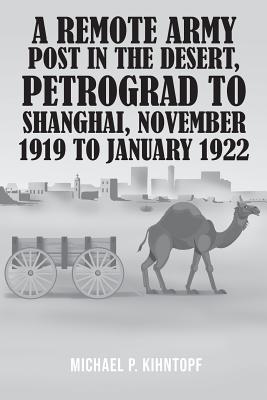 Michael Kihntopf is a retired U.S. Air Force captain (23 years) and retired high school world history and special education teacher. He holds a B.A. in history from Angelo State University, San Angelo, Texas, with graduate work at the University of Texas San Antonio. He is the author of two historical books which provide an overview of World War 1's Eastern Front and the author of three novels which center on World War 1 events and its aftermath in Russia. He has also written over 20 articles about many aspects of World War 1 that have been published in military history magazines.

About A Remote Army Post in the Desert, Petrograd to Shanghai, November 1919 to January 1922:

This book is an adventure/history tale about five characters bound up in the turbulent times following World War 1 and during the Russian Civil War. Emil Langemark is a disenfranchised German soldier who stayed behind as the Kaiser's army withdrew from Russian territory in 1918 preferring to throw his lot in with the counterrevolutionary army of General Nikolai Iudenich rather than face unemployment and famine in the new Germany. Evan Buk is a former Russian prisoner of war who was supposed to infiltrate Iudenich's army and spread Communist dissention in the ranks; however, cooperating with the new commanders was more rational and safer. Raisa, no family name in the spirit of the revolution, was a member to the Women's Battalion of Death and a women's rights activist in the Bolshevik cause but her patron, Fanny Kaplan, attempted to shoot Vladimir Lenin, the Bolshevik leader, and she had to run for her life. These three make up a machine gun detachment which is involved in an assault on the Bolshevik bastion of Petrograd in late 1919.

Albert Chamberlain is a British army sergeant who volunteered to teach Iudenich's army all about the new queen of the battlefield, the tank. In a fit of volunteering, he agreed to command one of the tanks in the offensive. Finally, the American Bart Buchanan who, undercover with the American Relief Association, is a spy charged with uncovering Bolshevik intentions toward the United States. He managed to hitch a ride in Buchanan's tank in an effort to get into Bolshevik command centers to get information.

After the failed battle, Langemark, Chamberlain, and Buchanan are thrown together in a disorganized retreat. The Red Army captures them, tries them, and sentences them d to a Siberian prison while Buk and Raisa disappear into the Bolshevik ranks as defectors. The book follows the three captured and sentenced characters across Siberia where they are liberated by the Czechoslovak Legion but captured by one of the most notorious blackguards, the Bloody White Baron Ungren-Sternberg and forced into his army of bandits and marauders. The five are thrown back together in a mad dash across Mongolia to reach the safety of China.

A Remote Army Post in the Desert, Petrograd to Shanghai, November 1919 to January 1922 (Paperback)