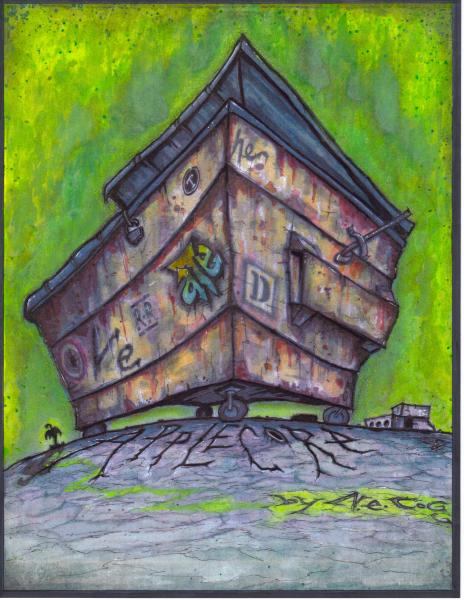 When it comes to alleys, there are two things you can usually count on: One - they smell funny. In fact, they pretty much stink! And Two - they have lots of garbage. But, there is one thing you don’t expect, which is for any of that garbage to have their own hopes and dreams. One particular piece of trash, Green Apple Core, lives in one of these alleys and wasn’t happy just being useless and worthless like all his other trash mates said he was. He has a dream of painting and becoming a great artist!  But what if his painting wasn’t any good? What if no one liked it? It can be scary to follow one’s dreams. So, what becomes of Green Apple Core and his dream of being an artist? What will his trash mates think of his finished painting? Well, whatever happens, it’s not what you might stink.  (Sorry, …it’s not what you might THINK.)

The Overrated Apple Core is more ridiculous rubbish from the melancholy mind of San Antonio artist and author N.E. Cogg. It is a book intended for kids of all ages - even the grown up kind. With wise-cracking wit and a preposterous play on words, he presents a twisted fable of sorts about believing in your dreams and having the courage and determination to make them come true, despite what other’s may say. Even when you’re just a lowly, discarded apple core.

About the author and illustrator:   N.E. Cogg is an artist, illustrator, author, bibliophile and all around creative misfit that currently resides right here in the Alamo city. He shares his whimsically strange life with his wife, 2 kids and a super-sized, retired greyhound named Drake. The Overrated Apple Core is the second book he has written and illustrated. His first is Gamer T. Root in Night of the Piscator.