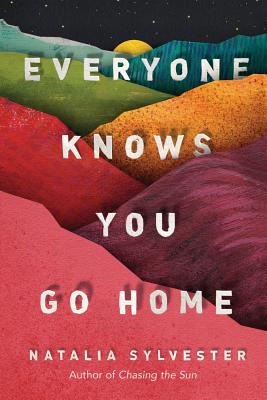 Born in Lima, Peru, Natalia Sylvester came to the United States at age four. As a child, she spent time in Florida and the Rio Grande Valley in Texas before her family set down roots in Miami, where she received a BA in creative writing from the University of Miami. A former magazine editor, Natalia now works as a freelance writer in Texas and is a faculty member of the low-residency MFA program at Regis University. Her articles have appeared in Latina magazine, Writer’s Digest, the Austin American-Statesman, and on NBCLatino.com. Natalia’s debut novel, Chasing the Sun, was named the Best Debut Book of 2014 by Latinidad, and was chosen as a Book of the Month by the National Latino Book Club.

About Everyone Knows You Go Home:

The first time Isabel meets her father-in-law, Omar, he’s already dead—an apparition appearing uninvited on her wedding day. Her husband, Martin, still unforgiving for having been abandoned by his father years ago, confesses that he never knew the old man had died. So Omar asks Isabel for the impossible: persuade Omar’s family—especially his wife, Elda—to let him redeem himself.

Isabel and Martin settle into married life in a Texas border town, and Omar returns each year on the celebratory Day of the Dead. Every year Isabel listens, but to the aggrieved Martin and Elda, Omar’s spirit remains invisible. Through his visits, Isabel gains insight into not just the truth about his disappearance and her husband’s childhood but also the ways grief can eat away at love. When Martin’s teenage nephew crosses the Mexican border and takes refuge in Isabel and Martin’s home, questions about past and future homes, borders, and belonging arise that may finally lead to forgiveness—and alter all their lives forever.

Everyone Knows You Go Home (Hardcover)