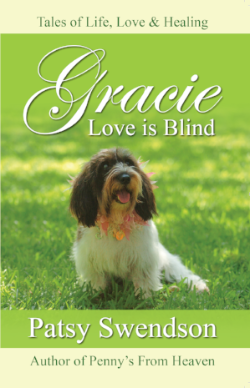 Enthusiasm, excitement, compassion, and empathy are at the forefront of Ms. Swendson’s writing. For thirty five years, she has promoted the human animal bond by word and deed. From her twenty years on daily television and radio to this day, she has gained national recognition for both her culinary skills and now her lifelong passion for the human companion animal bond and its extraordinary healing effects. Author of fifty three books, Patsy has had multiple award winning therapy dogs. She has been an avid key spokesperson speaking at a myriad of hospitals to include Walter Reed Medical Center, National Institute of Health, Brook Army Medical Center about the importance of therapy dogs for those returning from combat with PTSD, TBI and MST and severe burns. Her personal therapy dogs have worked multiple times a week with our wounded warriors, from severe burn survivors, multiple amputees to the blind or brain injured, in various rehabilitation settings, to include The Fisher Houses, HealthSouth Rehabilitation Institute of San Antonio, the Burn Unit and Warrior Family Support Center at Brooke Army Medical Center and elementary school children at Ft. Sam Houston. In 2006, Ms. Swendson formed the Penny’s from Heaven Foundation providing trained therapy and service dogs to honor, provide support, and encouragement to our service men and women in rehabilitation, through pet assisted therapy. She has received multiple awards for her work with therapy Veterinary Medical Foundation, for Devotion to Mankind through unselfish and courageous service. dogs. Three of her personal therapy dogs received Hero Dog of the Year awards from the Texas Veterinary Medical Foundation, for Devotion to Mankind through unselfish and courageous service.

About Gracie: Love is Blind

This is not another book about dogs! It is a book about redemption, fortitude, love, amazing grace and amazing Gracie. It is a human book about connection and overcoming. In the end each story is a love story. This is a book that needed to be written and a book that needs to be read. Because of Gracie, multiple lives have been altered, as healing began she became a band aid for fear, loneliness and pain in a myriad of people, to include that of her mother.