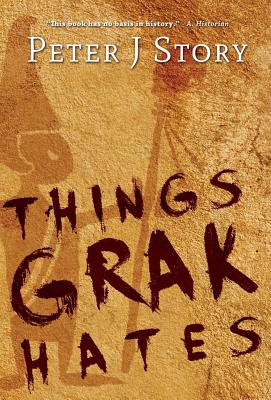 Grak hates things. Lots of things. And with a peculiar intensity too.

Grak’s contempt is so strong, in fact, that it often leaves his fellow tribesmen bewildered. And when attempting to describe his personality, they find themselves in need of words with greater nuance. “Neurotic” is typically used. “Sociopath” and “narcissist” are also common terms. The most popular descriptor, however, is “pathological.”

Grak, on the other hand, sees his situation in a rather different light. He finds his behavior “necessary” and “selfless,” or even “benevolent” when his mood is just so. Most often, though, he simply attributes his nature to “being human.”

But of all the things Grak despises, his antipathy for olives takes precedence. In his efforts to be rid of this nuisance, he gets his first taste of power and ignites a series of events with troubling consequences. Unwilling to give up his newfound influence, he sets about honing his only true talent: manipulation. But as his grip tightens, Grak’s naively selfish exterior crumbles to reveal a dark and malicious evil …

In his debut work, author Peter J Story brews a robust psychological satire infused with dry humor and a pinch of emotion. Set just prior to recorded history, Things Grak Hates chronicles the life of a bizarre nomad and his descent toward evil. Along the way, this unconventional allegory explores a variety of complex issues. Among them: power, politics, religion, redemption, the dissemination of ideas, and human nature itself.

Peter J Story lives in San Antonio, Texas with his wife and their two pugs. He writes code by day and fiction by night, considering himself an author of deliberate, genre-free stories with a soul. While his is not a pen name, he does enjoy chuckling to himself about how well it suits his passion.