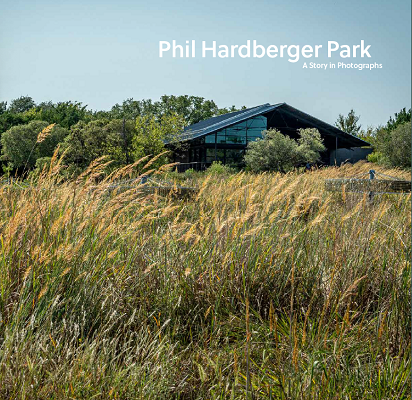 This beautiful book chronicles the daily activities of Phil Hardberger Park in San Antonio, Texas. The park is a natural oasis in the nation’s seventh-largest city. The photographs  were taken by both professional photographers and visitors to the Park.

The photographs capture the vivacity, energy, and structure of what a great city park can be. It is the latest fascinating attraction of this 300-year-old city, which already includes the Alamo and the city-length San Antonio River, adorned on both sides with restaurants, bars, and hotels. San Antonio is already the most visited city in Texas, and now the city has a world-class, beloved park that captivates local citizens and visitors alike.

Phil Hardberger Park encompasses 330 acres and attracts more than 1,000 people per day. It is, at heart, a nature park, showcasing the natural history and beauty of the South Texas landscape. It is also a living history book of the flora and fauna that existed at the time of the Battle of the Alamo. One of its majestic oaks, the Phil Hardberger Tree, is 400 years old. Its birth predates the city itself. In a land of challenging temperatures and storms, it survives; thrives even. It is an analogy of Texas itself.

In the middle of the Park stands a technological marvel. It is a Land Bridge that connects the two halves of the Park. Its massive size, its common usage by people and animals alike on a daily basis, its Skywalk access, and its complex construction of a hill where there was nothing but thin air, is fun to walk across and amazing to behold.

All of the above is amply illustrated in the pages, along with a history of the Park in the Introduction. Enjoy the photographs—they are works of art. Then visit Phil Hardberger Park and see for yourself.