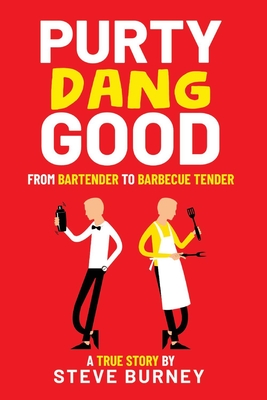 This is the heartwarming, inspirational, (perhaps cautionary) true story about a man starting over in midlife by opening a small, family business. This uplifting memoir will have you rooting for the underdog. Through his inspiring and against the odds story, you'll be reminded that dreams in fact, can come true.
If you enjoy Texas barbecue, Tennessee charm, and Seattle bars and restaurants, this adventurous tale of a hotel bartender starting a family business in about six months without having any previous experience is going to leave you shaking your head and laughing at the sheer audacity of it all.

With no experience, Steve Burney dared to take his life in a whole new direction when he was turning 50 years old. He had no practical background with owning, operating, or even working in a barbecue restaurant, but a series of events and inner reflections propelled him towards an epiphany he simply could not ignore.

This is an inspirational tale about believing that anything can be accomplished if one stays truly committed to acting, one step at a time, to make dreams turn into reality. Steve Burney honestly shares how his background was checkered with missteps, disappointments, and heartbreaks. He shows us that there was nothing about him or his life that would have indicated any certainty of success. He operated only on faith, both spiritual and from a loving family, that he steadfastly leaned on to keep him getting up after each time he was knocked down.

About the Author:
Steve Burney invites you to join him in supporting your local bookstore while he is promoting his book, PURTY DANG GOOD. This true story is about his inspired, but comically inept, idea to open Burney Brothers BBQ in a suburb of Seattle. With reluctant help from his older brother, Tom, and his wife, Leni, their restaurant opened in 2004 and was a popular fixture inside the Lake Forest Park Town Center for over sixteen years.

Steve grew up in New Braunfels, leaving at the age of nineteen to pursue professional acting in New York. He worked as a hotel bartender and manager in downtown Seattle for seventeen years. Steve and Leni are now retired and living in Bulverde.

In 1973, after graduating high school, Steve appeared in a summertime musical with Circle Arts Theatre in their 4th season. He is now appearing in their 53rd season production of Clue, the Stage Play, that will be running from March 25th through April 10th.

This is the heartwarming, inspirational, (perhaps cautionary) true story about a man starting over in midlife by opening a small, family business. This uplifting memoir will have you rooting for the underdog. Through his inspiring and against the odds story, you'll be reminded that dreams in fact, can come true.