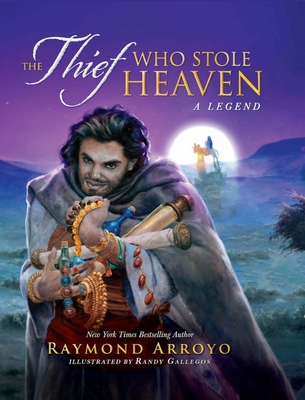 Attendees must purchase a signed copy of the book using the Add to Cart link below. Zoom event information and links will be emailed prior to the event.

Once again, bestselling author and broadcaster, Raymond Arroyo provides readers with a cinematic, adventurous holiday story based on ancient legends filled with deeper themes. The Thief Who Stole Heaven introduces audiences to the largely hidden character of The Good Thief.

Bridging the gap between Christmas and Easter, this unique story brings to life a compelling redemption story that is destined to be treasured and revisited year after year.

The Thief Who Stole Heaven is the second installment of a larger planned "Legend Series" of self-contained, episodic origin stories.

He has also worked for CNN and the Associated Press. Beyond these appearances, he is also seen weekly in more than 350 million households globally and heard on 500 AM/FM affiliates across the US as the host and Managing Editor of The World Over Live on EWTN.

The Thief Who Stole Heaven (Hardcover)