Watt Casey, My Guitar is a Camera 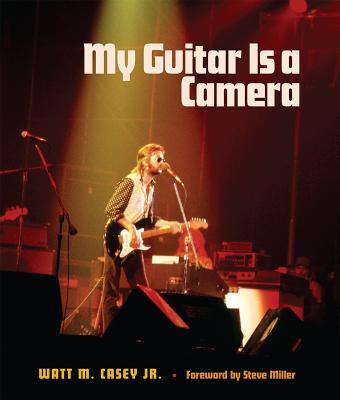 "In 1970, Watt M. Casey Jr. stood just a few feet from Jimi Hendrix as the guitar god performed in San Antonio--but he didn't have a camera to prove it. He vowed that'd never happen again. My Guitar Is a Camera, his new book, shows that he made good on that promise. It's packed with 194 photos of artists who passed through Texas in the Seventies, including local boy Stevie Ray Vaughan. You'll also find Eric Clapton, George Harrison, Muddy Waters, Elvis Costello, the Stones, the Dead, Albert and B.B. King, Dylan, Frampton and more. It includes recollections from eyewitnesses and a foreword by Steve Miller." -- Guitar World

Watt M. Casey, Jr. is a professional photographer and cattleman from Albany, Texas. His work is featured in the Grammy Museum's touring exhibit Pride and Joy: The Texas Blues of Stevie Ray Vaughan and also appears in CDs, box sets, music books, and other publications.

About My Guitar is a Camera:

In this rich visual history of the vibrant live music scene in Austin and elsewhere during the 1970s and early 1980s, Casey's lens reveals both the stage, awash in spotlights and crowd noise, and the more intimate, backstage moments, where entertainers hold forth to interviewers and friends. As Outlaw Country's cosmic cowboys mixed with East Coast rockers, Chicago bluesmen, and West Coast hippies, Watt Casey roamed at will, capturing on film the people, places, and happenings that blended to foster Austin's emerging reputation as "Live Music Capital of the World."

My Guitar Is a Camera (John and Robin Dickson Series in Texas Music, sponsored by the Center for Texas Music History, Texas State University) (Hardcover)

The evening of May 10, 1970, found a young Watt M. Casey Jr. standing awestruck, only a few feet from Jimi Hendrix as the legendary guitarist tore into his unique arrangement of “The Star-Spangled Banner” on the stage of San Antonio’s Hemisphere Arena during the Texas leg of his Cry of Love Tour.